Letter #12 How we manufacture silicon: computers’ crucial ingredient not found in nature 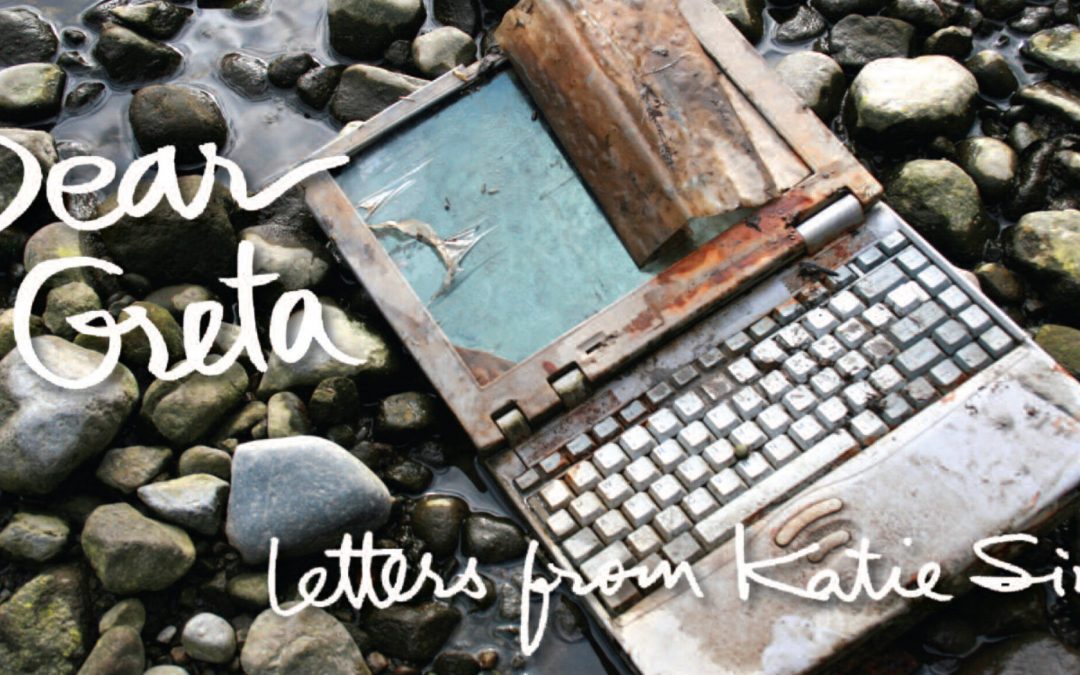 In her “Letter to Greta Thunberg” series, Katie Singer explains the real ecological impacts of so many modern technologies on which the hope for a bright green (tech) future is based on.

A letter to Greta Thunberg
by Katie Singer

Could we discuss silicon, that substance on which our digital world depends? [1] Silicon is a semiconductor, and tiny electronic switches called transistors are made from it. Like brain cells, transistors control the flow of information in a computer’s integrated circuits. Transistors store memory, amplify sound, transmit and receive data, run apps and much, much more.

One smartphone (call it a luxury, hand-held computer with portals to the Internet) can hold more than four billion transistors on a few tiny silicon chips, each about the size of a fingernail.

Computer chips are made from electronic-grade silicon, which can have no more than one impure atom per billion. But pure silicon is not found in nature. Producing it requires a series of steps that guzzle electricity [2] and generate greenhouse gases (GHGs) and toxic waste.

Silicon’s story is not easy to swallow. Still, if we truly aim to decrease our degradation of the Earth and GHG emissions, we cannot ignore it.

Silicon production starts with collecting and washing quartz rock (not sand), a pure carbon (usually coal, charcoal, petroleum coke, [3] or metallurgical coke) and a slow-burning wood. These three substances are transported to a facility with a submerged-arc furnace.[4]

Kept at 3000F (1649C) for years at a time, a submerged-arc furnace or smelter “reduces” the silicon from the quartz. During this white-hot chemical reaction, gases escape upward from the furnace. Metallurgical-grade silicon settles to the bottom, 97-99% pure—not nearly pure enough for electronics. [6]

If power to a silicon smelter is interrupted for too long, the smelter’s pot could be damaged. [7] Since solar and wind power is intermittent, they cannot power a smelter.

Typically, Step Two takes up to six metric tons of raw materials to make one metric ton (t) of silicon. A typical furnace consumes about 15 megawatt hours of electricity per metric ton (MWh/t) [8] of silicon produced, plus four MWh/t for ventilation and dust collection; and it generates tremendous amounts of CO2.[9]

Manufacturing silicon also generates toxic emissions. In 2016, New York State’s Department of Environmental Conservation issued a permit to Globe Metallurgical Inc. to release, per year: up to 250 tons of carbon monoxide, 10 tons of formaldehyde, 10 tons of hydrogen chloride, 10 tons of lead, 75,000 tons of oxides of nitrogen, 75,000 tons of particulates, 10 tons of polycyclic aromatic hydrocarbons, 40 tons of sulfur dioxide and up to 7 tons of sulfuric acid mist. [10] To clarify, this is the permittable amount of toxic waste allowed annually for one New York State metallurgical-grade silicon smelter. Hazardous waste generated by manufacturing silicon in China likely has significantly less (if any) regulatory limits.

Step Two’s metallurgical-grade silicon is crushed and mixed with hydrogen chloride (HCL) to synthesize trichlorosilane (TCS) gas. Once purified, the TCS is sent with pure hydrogen to a bell jar reactor, where slender filaments of pure silicon have been pre-heated to about 2012F (1100C). In a vapor deposition process that takes several days, silicon gas atoms collect on glowing strands to form large polysilicon rods—kind of like growing rock candy. If power is lost during this process, fires and explosions can occur. A polysilicon plant therefore depends on more than one source of electricity—i.e. two coal-fired power plants, or a combination of coal, nuclear and hydro power. [11]

A large, modern polysilicon plant can require up to 400 megawatts of continuous power to produce up to 20,000 tons of polysilicon per year (~175 MW/hours per ton of polysilicon). [12] Per ton, this is more than ten times the energy used in Step Two—and older plants are usually less efficient. A single plant can draw as much power as an entire city of 300,000 homes.

Once cooled, the polysilicon rods are removed from the reactor, then sawed into sections or fractured into chunks. The polysilicon is etched with nitric acid and hydrofluoric acid [13] to remove surface contamination. Then, it’s bagged in a chemically clean room and shipped to a crystal grower.

Step Three’s polysilicon chunks are re-melted to a liquid, then pulled into a single crystal of silicon to create a cylindrical ingot. Cooled, the ingot’s (contaminated) crown and tail are cut off. Making ingots often requires more electricity than smelting. [14]The silicon ingot’s remaining portion is sent to a slicer.

Like a loaf of bread, the silicon ingot is sliced into wafers. More than 50 percent of the ingot is lost in this process. It becomes sawdust, which cannot be recycled. [15]

Layer by layer, the silicon will be “doped” with tiny amounts of boron, gallium, phosphorus or arsenic to control its electrical properties. Dozens of layers are produced during hundreds of steps to turn each electronic-grade wafer into microprocessors, again using a great deal of energy and toxic chemicals.

Questions for a world out of balance

After I learned what it takes to produce silicon, I could hardly talk for a month. Because I depend on a computer and Internet access, I depend on silicon—and the energy-intensive, toxic waste-emitting, greenhouse gas-emitting steps required to manufacture it.

Of course, silicon is just one substance necessary for every computer. As I report in letter #3 [18], one smartphone holds more than 1000 substances, each with their own energy-intensive, GHG-emitting, toxic waste-emitting supply chain. [19] One electric vehicle can have 50-100 computers. [20] When a computer’s microprocessors are no longer useful, they cannot be recycled; they become electronic waste. [21]

Solar panels also depend on pure silicon. At the end of their lifecycle, solar panels are also hazardous waste. (In another letter, I will outline other ecological impacts of manufacturing, operating and disposing of solar PV systems.)

I’d certainly welcome solutions to silicon’s ecological impacts. Given the magnitude of the issues, I’d mistrust quick fixes. Our first step, I figure, is to ask questions. What’s it like to live near a silicon smelter? How many silicon smelters operate on our planet, and where are they? If we recognize that silicon production generates greenhouse gases and toxic emissions, can we rightly call any product that uses it “renewable,” “zero-emitting,” “green” or “carbon-neutral?”

Where do petroleum coke, other pure carbons and the wood used to smelt quartz and produce silicon come from? How/could we limit production of silicon?

How does our species’ population affect silicon’s production and consumption? I’ve just learned that if we reduced fertility rates to an average of one child per woman (voluntarily, not through coercion of any kind), the human population would start to approach two billion within four generations.[22] (At this point, we’re nearing eight billion people.) To reduce our digital footprint, should we have less children? Would we have less children?

What would our world look like if farmers grew more wheat and rice than manufacturers make transistors? Instead of a laptop, could we issue every student a raised bed with nutrient-dense soil, insulating covers and a manual for growing vegetables?

What questions do you have about silicon?

Katie Singer’s writing about nature and technology is available at www.OurWeb.tech/letters/. Her most recent book is An Electronic Silent Spring.