When Women Become Allies to Save Watersheds and Wildlife 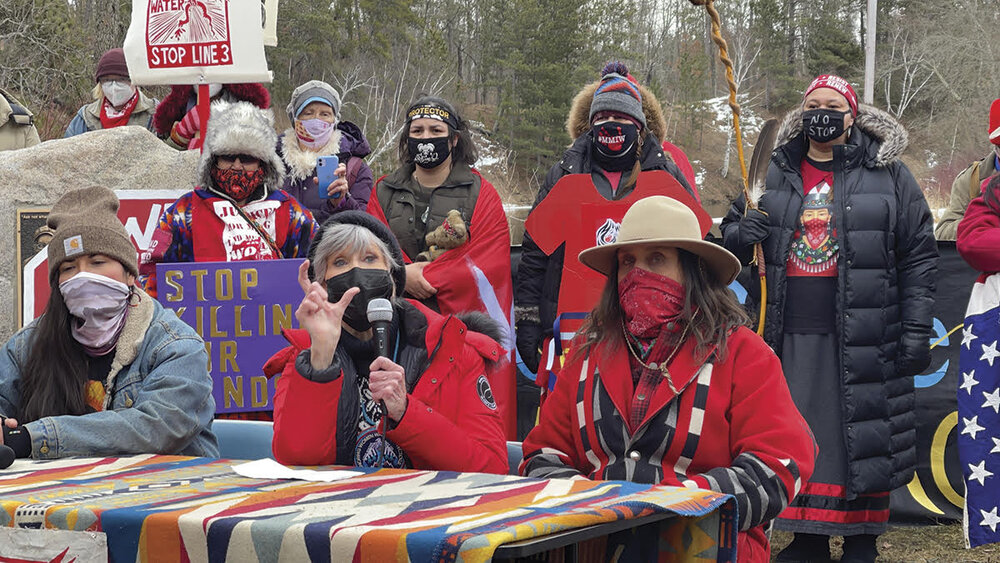 This article was produced by Local Peace Economy, a project of the Independent Media Institute.

The word “Minnesota” derives from one of two Dakota words, either Mni Sóta meaning clear blue water or Mnissota meaning cloudy water. Just one letter can change the entire meaning. Just one oil spill could ruin the entire ecosystem.

I traveled to northern Minnesota with Jane Fonda and Tessa Wick in March to stand with the Ojibwe who are fighting a massive assault on their ancestral territory. Line 3 is a pipeline that was built in the 1960s and currently has 900 structural problems according to Enbridge, the Canadian company that owns it. Under the guise of replacing it, Enbridge is in fact abandoning the old one and aggressively laying the infrastructure to expand it into a larger pipeline with greater capacity. The proposed monstrosity would snake through 200 pristine lakes and rivers in northern Minnesota including watersheds for the wild rice that is unique to this part of the world and has been intrinsic to the Anishinaabeg/Ojibwe way of life for centuries. A spill could permanently destroy rice beds as well as the fish and wildlife habitat. Enbridge has had over 800 spills in the last 15 years, most notably the largest inland oil spill in U.S. history when 1.2 million gallons leaked into the Kalamazoo River in 2010. A spill is inevitable.

During his lame-duck period, Donald Trump approved Line 3, in spite of no environmental impact study. It is currently under review. Now that justice has been rendered in the George Floyd case, there is hope that Minnesota Attorney General Keith Ellison will turn his attention to the social and environmental injustice of Line 3. President Biden should overturn the Army Corps permit to Enbridge as he did with the Keystone XL pipeline.

Our first stop was at a compound on the White Earth Reservation. It houses 8th Fire Solar, a facility where tribal members are building thermal solar panels. It is the headquarters for Honor the Earth, an organization founded by Winona LaDuke, with the mission of creating awareness and support for Native environmental issues. Winona is a magnetic and fiery leader who has long been a vital force protecting the earth. In addition to harvesting wild rice (manoomin) and building solar panels, Winona runs a fledgling hemp business, taps maple trees, and has ventured into small-batch coffee roasting. The people on the White Earth Reservation are making every effort to be self-sufficient through sustainable activities.

We were served delicious buffalo egg rolls while the women water protectors shared stories of getting roughed up by the local police for protesting the pipeline. They were strip-searched and kept in overcrowded cells—in the time of COVID-19. The Minnesota Public Utilities Commission has created an Enbridge-funded account to pay for policing Enbridge opponents—meaning they are paid more when they harass and arrest activists. When we were convoying to a press conference, the two women driving in front of us were pulled over for not signaling 100 feet before turning. Fortunately, they were both constitutional lawyers—and white, I might add. After delaying them for 15 minutes, the officer realized what she was up against and backed down.

On the banks of the Crow Wing River, against a backdrop of Ojibwe grandmothers in traditional garb, Jane and Winona shared a panel with Tara Houska, an Ojibwe, Yale-educated tribal lawyer who hung up her suit in D.C. to come back and live with other water protectors on a 70-acre resistance camp called the Giniw Collective.

Jane’s presence had brought out a slew of media. She has become the wise woman educating and inspiring her vast network of old and new fans. She spoke knowledgeably on the salient issues surrounding climate change. She emphasized the importance of good-paying jobs being in place as we transition from fossil fuels to sustainable energy. She mentioned a statement Winona made about a moment when we had the choice to have a carbohydrate history or a hydrocarbon history, and we chose the wrong one, adding, “It’s time to correct that.” Tara explained the illegitimacy of Line 3 being built on public lands. She has joined the charge of young activists fed up with ineffectual political policy who are using their bodies and agency to say “no more.” Winona quoted Arundhati Roy, urging us to see the “pandemic as portal”: “We must go through the portal leaving dead ideas behind, ready to imagine a new world.”

The crowd was energized; everybody was wearing red. There was a festive feeling of optimism in the air. At key points, a giant black bear puppet roared with approval or grunted with displeasure. Indigenous drummers drummed. River otters played.

Four years ago, I accompanied Jane on a flyover of the Canadian tar sands in Fort McMurray, Alberta, source of the dirty oil that Enbridge exports. From the air, the open-pit mines made me think of cancer sores with the outgoing vessels bringing disease to the rest of the body. The jobs pay well. It’s how my sister and her husband bought their home. Workers go where the money is. But it’s a dying industry. Justin Trudeau enthusiastically signed on to the Paris climate accord and vowed to invest in renewable energy sources, but he has bowed to the corporate powers who are squeezing out every ounce of filthy lucre from the tar sands before they collapse. Not only is tar sand extraction the dirtiest and most inefficient process, but it’s also the most uneconomical. If the government took the bold step of subsidizing other sectors of the economy such as renewables, housing and transportation, to the degree they subsidize the tar sands, it would be far more beneficial to the economy and people’s lives—in the long run. But they are shortsighted.

The fish and wildlife that the Métis First Nations of the Athabasca region have traditionally subsisted on are riddled with deformities and tumors. Eighty-seven percent of the community believes the tar sands are responsible. We sat with Cece, who was a heavy equipment operator for seven years. At 60 years old, she had outlived all her coworkers, including her husband, who died of cancer the year before. She ran for tribal chief on a platform of pushing for stricter tar sands regulations, but the industry bribed her opponent with the promise of a senior care facility if he would show his support. She lost by one vote. Divide and conquer, the age-old tactic of domination.

With Line 3, Enbridge does not want to repeat the clashes they encountered at Standing Rock, so they have pumped money into targeted communities. The chronic neglect of government on the reservations, exacerbated by the economic downturn from the pandemic, has served to Enbridge’s advantage. People need to feed their families, and Enbridge is there with the jobs. Enbridge created a trust from which the Fond du Lac tribal government doles out monthly payments to their members. It’s a terrible dilemma for individuals who fear reprisal if they express opposition. The project has created deep divisions within the Indigenous community, but the vast majority are fervently against it.

With people coming to work from all over the country, the Enbridge man camps are potential COVID-19 superspreaders. According to the Violence Intervention Project in Thief River Falls, at least two women have been sexually assaulted. Numerous women say they have been harassed by pipeline workers and do not feel safe. Two Enbridge employees based in Wisconsin were recently arrested for sex trafficking.

Jane did a Skyped interview with Lawrence O’Donnell on MSNBC. In a breathtaking six-and-a-half-minute uninterrupted spiel, she laid out the micro and the macro of the entire situation. Later, she worried it might have come across as manic. No, Tessa and I assured her, it came across as urgent.

After a long drive, Tara led us down a narrow, snow-covered dirt road to a small encampment of tents where they were sugaring the maple trees. Sap is collected and continuously poured into a gigantic hand-hewn pot mounted over an open fire, then reduced down for several days. It’s very labor-intensive—the ratio is 26 gallons of sap to make one gallon of syrup. They are not selling the syrup; they want to hold on to it in case there’s a shortage or some other catastrophe occurs. They’re holding on to their wild rice too. Everyone is on tenterhooks waiting for a decision from the White House. Their future hangs in the balance.

Barbara Williams is a Canadian musician, actress, and activist. As a musician, she has performed in concerts devoted to peace, workers’ rights, and the environment. She is the author of The Hope in Leaving: A Memoir.